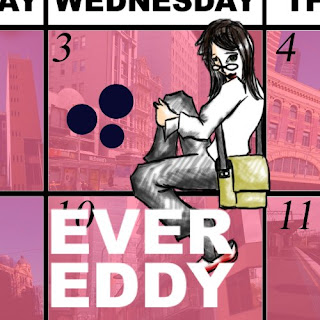 Edwina Collins is here and she's ready! Boy is she ever ready! Click on to read the whole thing and see what the newest addition to the X-script line up has to offer!

It’s five in the morning, and Edwina is dreaming of blueberries.

Six in the morning
The Local Library
A nervous looking young man named Gary is standing out the back staring at the staff only door
He straightens up his jacket for the tenth time
Suddenly the door flies open and two arms reach out and grab Gary by his collar, dragging him in to the building
The two arms belong to Miranda, a red haired woman in a suit, and right now she’s looking really frustrated
Miranda: Gary, I presume
Gary: yes!
Miranda: welcome. You’re our new library monkey
Gary: I thought the job was called librarian assistant
Miranda: same thing. No one’s going to choose to become something called a “library monkey”. And now we’re walking
Miranda walks off quickly with Gary in tow
Gary: so I have some forms…?
Miranda: FORMS?! YOU HAVE FORMS?! No. No. No. I HAVE FORMS. I have forms coming out of my arse and they are not going to sign themselves
Gary: um…I can help out with them
Miranda: you’re a library monkey. You most certainly cannot!
Gary: oh
Miranda: only one person is allowed to officially sign them and that is head librarian, Edwina who is never here on time, never paying attention and never there when you need her!
Gary: a bit of a slacker, eh?
Miranda: don’t you DARE talk about your new boss like that! You are a library monkey and she is the member of the team who has been here the longest and she is possibly my oldest friend!
Gary: okay…well…if you need her…why don’t you call her?
Miranda gives Gary a dry look
Miranda: there’s something you need to know about Eddy…and her…quirks…
Gary: what?
Miranda: what was that?
Gary: what?
Miranda: the cynical “what” that just came out of your mouth. You don’t believe she has quirks?
Gary: I do!
Miranda: you want to see what happens when I call her?
Miranda pulls out her phone, dials Eddy’s number and puts it on speaker phone
Eddy: I DON’T HAVE BLUEBERRIES!
Miranda: I DON’T CARE! We have a book signing today amongst the rest of the absurd crap we have to get done TODAY!
Eddy: I don’t think you understand! I. Have. No. Blueberries.
Miranda: no I don’t think you understand! I. Have. No. Head. LIBRARIAN!
Eddy: Miranda…you know how this works
Miranda: no…I know how you THINK it works. But I’m sure that it does not!
Eddy: how can you be a skeptic?
Miranda: so easily
Eddy: step one – I go to sleep
Miranda: oh lord…not this again
Eddy: step two – I have a dream
Miranda: stop it
Eddy: step three – in the dream there is always a specific item
Miranda: UGH!
Eddy: step four – I wake up, find the item and put it in my bag
Miranda and Eddy: (in unison) and step five – sometime throughout the day that item saves our lives
Miranda: GET TO WORK NOW!
Eddy: blueberries! I dreamt about blueberries last night!
Miranda: that doesn’t mean anything!
Eddy: what about the time I packed dog biscuits and despite neither of us having a dog?
Miranda: coincidence!
Eddy: that dog attacked us and we used the dog biscuits to escape that crazy dog when it attacked us!
Miranda: the dog attacked us BECAUSE of the biscuits!
Eddy: that bottle of bleach we used to clean up the vomit the kid left in the foyer?
Miranda: he threw up because he smelt the cheap chemicals!
Eddy: the cigarette lighter!
Miranda: nothing happened. You didn’t take it
Eddy: exactly! And when those two men asked us for a light we couldn’t help them!
Miranda: so?
Eddy: so? They were male models! They could have given us their numbers and we could have dated male models!
Miranda: that is bull
Eddy: page four in today’s paper!
Miranda rolls her eyes while opening today’s paper
Miranda mouths the words “so damn hot” as she looks at the two models
Miranda: GET TO WORK!
Eddy: need to find blueberries first
Eddy hangs up
Miranda: ARGH!
Gary: um…
Miranda: what?
Gary: I know a fruit stand nearby. I could get her some blueberries
Miranda: yeah…but it will still take her an hour to get here by train
Gary: I could pick her up on my motorbike
Pause
Miranda: marry me, Gordon
Gary: my name is Gary
Miranda: moment is over! Go get her!
Gary: uh…okay…
Miranda: NOW!
Miranda hands Gary a piece of paper with Eddy’s address and he runs out

Gary pulls up to a fruit stand attended by an attractive young woman
Woman: wow
Gary: you like the bike?
Woman: I’m amazed you stopped. I see you pass by every morning
Gary: oh…uh…sorry
Woman: why are you apologizing?
Gary: I have no idea
Woman: what can I do for you stranger?
Gary: blueberries
Woman: what would you say if I said I had only one punnet remaining
Gary: I would say “woohoo”, “thank you” and “I love you”, not necessarily in that order
Woman: I was kind of saving them…so…you owe me
Gary: damn right I do!
The woman writes a number on a card and puts it in a plastic bag with the blueberries
Woman: my name is Catherine
Gary: my name’s Gary. Nice to meet you
Catherine: see you around?
Gary: count on it

Eddy and Gary rush in to the library
Miranda: Gary…I want to bear your children
Gary: um…okay…
Miranda: don’t get ideas…I’m just happy you got Eddy here…and it’s been so long since I was with a man that I would pretty much bear anyone’s children
Gary: oh
Eddy: so today we’ve got a writer coming in to sign books
Gary: who?
Miranda: Jon Skylark – he writes some comic book called “Gloveman”
Gary: cool. Is he here yet?
Miranda: he was supposed to be but…!
Jon Skylark walks in
Jon: sorry I’m late! Hope I didn’t keep you waiting!
Eddy: not at all!
Miranda glares at Eddy
Eddy offers Jon a blueberry
Jon: um…no thanks
Eddy: rats
Miranda: come this way to the table we’ve set up for you
Miranda leads Jon away
Gary: (to Eddy) you really believe you see the future?
Eddy: no…but this hasn’t steered my wrong yet and I don’t like to mess with things I don’t understand
Gary: what’s the weirdest item you had to pack?
Eddy: a broadsword
Gary: what?
Eddy: come on! We need to set up!
Eddy walks off
Gary: man I want to hear that story…

A line forms for the signing
Eddy is offering blueberries to everyone
No one is accepting
Most people think that it’s weird
That’s why Miranda drags Eddy away
Miranda: you are creeping people out
Eddy: only a bit
Miranda: I can’t believe you’re the boss sometimes…did you even fill out the paper work?
Eddy: as much as I could
Miranda: what’s that mean?
Eddy: it means all our pens are out of ink
Miranda: because you didn’t fill out the order for new stationary
Eddy: ugh…how is this going to get worse?

A fan steps forward to get their comics signed
Jon: who do I make it out to?
Fan: you don’t remember me?
Jon: uh…
Fan: we met at a comic convention
Jon: I have been to lots of conventions…
Fan: six years ago! Remember?
Jon:  Um…
Fan: I said “hey I loved you work on Gloveman: Year One” and you said “cool, thanks man”
Jon: oh…okay…
Pause while Jon signs
Fan: can I touch your face?
Jon: pardon?
Fan: can I touch your face?
Jon: uh…no…
Gary: okay buddy…maybe you should move
Fan: back off “buddy”! This is between me and this genius of a writer
Jon: I don’t feel comfortable with you touching my face
Fan: oh…okay
Awkward pause
The fan leaps across the table and grabs Jon
Fan: EVERYONE BACK OFF! NONE OF YOU DESERVE TO BE IN HIS PRESENCE!
Tense silence
Eddy: um…blueberry anyone?
Fan: I SAID. BACK. OFF!
Gary leaps over, pulls Jon away from the fan and punches the fan in the face
The fan falls to the ground
Gary lifts the fan up by the collar and raises his fist
Miranda: whoa…
Gary calms himself, counts down from five under his breath and then lets the fan go
Gary: get out of here
The fan scampers away
Miranda: (to Eddy) I don’t know about you…but I like him
Eddy: agreed

Later
Jon: thanks again, Gary
Gary: not a problem
Jon leaves
Gary: is every day like this?
Miranda: every day is weird
Gary: so…um…no use for the blueberries
Miranda: YES! VICTORY! Maybe you’ll be on time for work tomorrow!
Eddy: the day isn’t over
Gary: well…for me it is so I’m off
Miranda: good work today, Gary
Gary: oh! Before I do go…can you sign this form?
Eddy: sure
Gary hands Eddy a form
Miranda: does that say Community Service?
Gary: yeah…I need to show it to the officer in charge of my case to show I’m completing my hours
Awkward pause as Miranda and Eddy glance at each other
Gary: uh…you…you knew this before hand, right?
Pause
Miranda: of course!
Eddy: yeah! I have all your paper work!
Gary: great! So…can you just sign me off?
Miranda: um…no pens, remember?
Gary: uh…I kind of need this done, so…
Eddy: I’ve got it!
Eddy rushes off to the kitchenette and comes back with an empty pen, a cup and some paper
Eddy pulps the blueberries in the cup then dips the pen in to the juices to write on the paper
Eddy: see! Pass me the form!
Gary passes Eddy the form
Eddy signs
Eddy: tada!
Gary: well I’m convinced
Miranda: not another one
Gary: well thanks guys. I’ll see you tomorrow
Gary leaves
Eddy: what do you think he did?
Miranda: I don’t know…but did you see him handling that insane fan?
Eddy: yeah
Miranda: what if he’s a violent psychopath?
Eddy: I don’t think violent psychopaths get off with community service…
Miranda: didn’t you get sent his paper work?
Eddy and Miranda walk in to Eddy’s office where there are piles and piles of paper work
Eddy: our answer is somewhere in there…
Miranda: there’s a lot of sorting to do…
Eddy: yep…
They grab their things ready to go home
Miranda: you actually believe you were right about the blueberries…
Eddy: ye of little faith
Miranda: okay…psychic…why did you dream about blueberries and not just a pen?
Eddy: if we had another pen, I would have just used it up earlier with more forms. Maybe there were forms that weren’t supposed to be sent today…maybe a reason neither of us will ever know

Gary pulls up to the fruit stand where Catherine is packing up
Gary: hey! You got plans?
End

So now you’ve read it! Let me know what you think!