So last year I organized a "Secret Santa" for the Melbourne Comic Creators Monthly Meet Up, and it went pretty well, so I'll be doing it again this year. So please refer here for just how the process works.

STEP ONE: Come to the November Melbourne Comic Creators Meet Up (Link to Come) 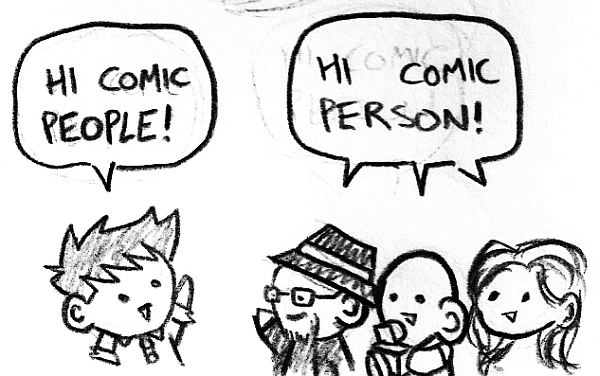 So to start with, showing up is important. When you sign up for Secret Santa you're committing to come to both the November AND December Meet Ups. More details later.

STEP TWO: Write down your name AND a character you want to see drawn.

Whoever pulls your name out of the hat will be drawing that character for you, and likewise, whoever you pull out of the hat - you will draw a character for them. It is important to include a reference of some sort if choosing something a bit obscure. (IE: "Rex-splode from Invincible" or "That Bulletproof Kid, look it up on Facebook").

STEP THREE: Chuck your name in the hat/box/bag/whatever I have on the day.

Do it better than I did as above.

STEP FOUR: Draw out a name.

If you happen to draw out your own name, you just redraw.

STEP FIVE: Draw the character that the person requested.

Art must be A4 - no larger and no smaller. It can be traditional OR digital art which is printed. Comic writers have also taken part in this before - sometimes drawing a small picture accompanied by a little bit of prose, cut and paste collages. I'm not restricting this Secret Santa to a particular caliber of artist as the purpose of the meets are to encourage and improve our art.

STEP SIX: Come to the December Meet Up and give your gift!

So to participate in Secret Santa it's important to make it to both the November AND December Meet Ups. However if you find you are unable to make it to the December one, you need to nominate someone who will at least deliver your gift and also collect yours. Last year I did a second round of this online but I would rather avoid that this year. Also keep in mind if you don't come to the December meet, then someone misses out on getting art, and someone has put effort in to an art piece for nothing.

If there are any concerns, questions etc, come find me on Facebook.
Posted by X-script? at 10:04 PM