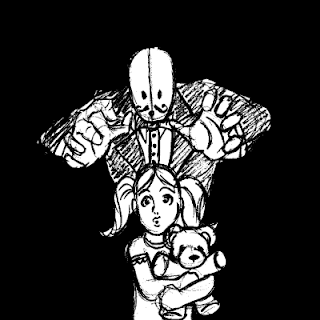 For Halloween we present a little short story. Read at night if you'd like.
﻿
“If you only have very small legs then it’s hard to walk very long hallways,” thought Jemima.

The hallway had always seemed very long during the day and the five year old was sure that it was even longer in the dark.

At the end of the hall was the spare room, being rented by the lovely Fafadena, who had gentleman callers every day, but Jemima had to know who it was that called upon the pale skinned woman at night.

If she stood on the toy chest in her room, Jemima could see the silent figures coming and going from her bedroom window. They wore suits and moved in single file as if in a trance. Through the old dusty glass, Jemima could never make out their faces, but their lifeless movements somehow made this hauntingly appropriate, as they drifted off down the street, disappearing in to the black of night.

Silently, Jemima prayed that she would avoid the squeaky floorboards as her feet padded over the cold wood. She hadn’t noticed just how cold it was tonight outside of the warmth and safety of her bed, and her gown simply wasn’t enough to deal with the chill in the air. Jemima didn’t look up because she knew that there were portraits hanging in the hall with their eyes staring out in to the darkness, staring at all who passed through the hall.

Under the door at the end of the hall, Jemima assumed was the glow of Fafadena’s lantern, accompanied by the voice of the pale woman herself. The house was otherwise silent, and Jemima couldn’t even hear her mum’s snoring anymore, as if Fafadena and her were the only two people in existence.

The end of the hall grew closer and closer to Jemima and behind her there was now just pitch black. Like a moth to a flame, Jemima knelt down next to the light under the door hoping to see what was going on in the room of Fafadena.

On the floor were lifeless black shoes attached to statue like legs garbed in black threads. Those of a suit. Those of butlers. The satin gown of Fafadena floated among them, swaying in a hypnotic pattern, a companion to Fafadena’s cool, cruel voice. Jemima couldn’t understand what Fafadena was saying, but her lifeless visitors seemed to agree without saying a word.

Then there was a sense of alertness in their master’s voice. The shoes began to walk about the room. Thudding. In sync with one another. Something had scared those in the room. Footsteps began to approach the door. Jemima backed away from the light, but only slightly. Had they noticed her? Should she run back down the dark hallway?

The footsteps stopped at the door and there was no more noise. Jemima stared at the well polished shoes standing there. Lifeless once more. It felt as if time itself had frozen as Jemima tried desperately not to make a sound.

The feet came back to life and began to move once more, when another shadow eclipsed the light under the door. Jemima couldn’t tell what it was at first. It looked like a black hour glass with a white shadow, but that didn’t make sense. There was something next to it. Jemima’s eyes adjusted to get a better look. It was looking back at her. Atop the black, sideways bowtie was a head. A faceless head staring under the door, staring directly at her.

Jemima cupped her hands over her mouth trapped in the steadfast gaze of the inhuman Butlerman. No one was talking. They seemed fixed on what lay on the other side of the door.

Fafadena’s crystal cold voice rang out once more and the faceless face went away. Jemima edged away from the door hoping there was still time for her to return to bed, but she recognized the creaking noise that told her the door was opening. The long agonizing sound heralded the silhouette of one of the seemingly mindless men.

Jemima curled up behind the dresser in the hall as the thudding noises of marching men began. The men were moving down the hall and as much as she wanted to shut her eyes, Jemima couldn’t. She had to make sure that none of them would see her.

Exact copies of each other, marching in time down the hall, the shadows stretching across their featureless faces.

Past Jemima they continued to march in time with the first two.

Jemima almost sighed in relief when she saw it was the last one. She would have sighed if it hadn’t turned its head and looked directly at her. Before walking away like the others.

Fafadena stood in the doorway, casting a long shadow down the hall as she watched her servants leave. She had to have seen what the fifth did. She stared in to the void for a long time while Jemima just wished she could go back to bed.

Fafadena’s shadow turned away and began to disappear behind the closing door. “Sweet dreams” she said aloud. Jemima scampered back to her room in the dark and dove in to the safety of her sheets. Her heart was racing. Pounding. Beating at the rate of the march of the Butlermen. Then there was sleep.

Jemima’s mother had no time to hear tall tales that morning. There were meals to be prepared. There was cleaning of all sorts to do. Apparently even the newspaper had more important stories than Jemima’s.

Jemima didn’t think the stories of vanishing townsfolk were as important as what had happened to her last night, and she stared at Fafadena as she emerged for breakfast. Nothing seemed to be amiss.

As she grew older Jemima began to believe she had imagined Fafadena’s butlermen and her memories of them slowly faded in to the back of her mind. In to the unknown. In to the forgotten. In to the black. In to the darkness. A place where Butlermen would prefer to work, if they existed.
Posted by X-script? at 4:00 AM

Email ThisBlogThis!Share to TwitterShare to FacebookShare to Pinterest
Labels: Presents